Discover how to access money for products and services needed by your child with disabilities!

It’s OK to Ask for Help! 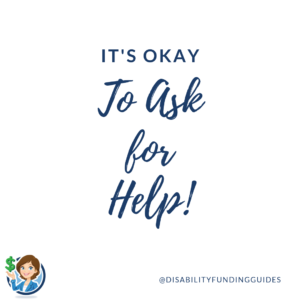 It’s OK to Ask for Help!

I have been helping families find funding for their children with disabilities for over 12 years and have heard many stories about the struggles these families face every day. Each time I hear someones story I am in awe of how strong they are when dealing with relentless challenges.

It took a while, but I finally figured out that half the battle is to realize that it is OK TO ASK FOR HELP!

Let me share two examples with you of people facing this particular battle. One is the story of a father I worked with. The second is a personal story that my own family experienced.

Example One – A Father in Need

There was a father I worked with whose family’s needs were immense. I gave him a great funding source to apply to and he did all the steps needed to be successful.

The first step being the insurance denial, which took far longer than it should have (and got a bit frustrating), but we kept at it and submitted an application. A short time later, he got a NO Letter stating they would not be funding the bike he needed for his child. So he sent me an email, showing me the NO Letter and stated that he didn’t want to apply to any other organizations.

I was surprised at this reaction. I couldn’t understand why he wouldn’t want to keep trying and get the money from another funder just because he had gotten one “no.”

So I emailed him back and asked why he didn’t want to continue. I explained that getting a “no” is ok. I told him it is going to happen and eventually he will get a “yes.”

His family had gone through a multitude of hardships. I was shocked at how much one family could endure. I actually had no idea from any of our conversations just how bad things had been until after I sent him an email telling him it is not unusual to get a “no” response, and that he needed to send out more applications, quite a few in fact, to increase his odds of getting funded.

Because he said he didn’t want to do this anymore, I pushed to understand why and he finally told me his entire story.

In response I told him about Hal and how at first he would not ask anybody for help. I explained how far Hal had come after he saw so many generous people give Jacob over $12,000 and realized that it isn’t difficult to get money for his child. Hal tells everyone, “IT IS OK TO ASK FOR HELP!”

I explained to this father how he needed to tell his whole story in the letter that he was going to submit to the funding source. I explained that the people he is asking are giving the money because they want to. That is what they do; they give money to children with disabilities because that is their mission.

About a week later, I got an email from him. He attached the letter he had written to include with his applications. It was almost three pages long. By the time I got to the last page, I had tears in my eyes. I would like to share with you the last few paragraphs he wrote:

“Given what we have been through, and as hard as it has been, nothing is harder than for me to write this letter and to realize that I can’t do it all for my son. The master plan for his life has fallen apart and I cannot afford to provide the best life for him. All along my pride and love for him has stood side by side to make it all happen. I always found a way. Somehow, some way, I managed to do it. All it takes is hard work, determination and effort and it will happen, right?

The hardest part is admitting I have come up short. I fought for months with my pride about asking for help. I am not that type of person. We are not that type of family. I mean we conquered raising a special needs child to become an incredible person; we conquered cancer, depression, financial loss, the loss of our home, the loss of a job and a career. We did it all, without help, on our own. We give help, we do not ask for it. Well, up until now.

We need help, we need help to get our son a bicycle to ride, to engage in the only real physical activity he can and does do. We need help to put that smile back on his face, to have him ride with his sister. We need help to show us that there is hope; that everything we have been through has not been for nothing. This is the hardest thing we have had to do, ask for help. Can you help?”

Another Example: This Time It’s a Personal Story

One of my own family members has had a lesson on why it’s OK to ask for help. Without this lesson, he would have had to pay a bill of over $8,000.

My son Christopher had a health insurance policy for some time and it cost quite a bit, so he decided to lower his monthly cost because it was becoming difficult to afford the monthly payment. Less than two weeks before he ended up in the hospital, I told him, “You really need to change your insurance.” He replied that he was not going to change the plan because he couldn’t afford the higher monthly payment. I expressed concern because his policy had such a high deductible. He said, “That’s fine; I never use it.” Then out of the blue, he had an emergency appendectomy. Thankfully, between my conversations with him and his fiancé, he arrived at the hospital in the nick of time.

Christopher ended up with a hospital bill of over $8,000 with that high deductible. I reminded him that it’s just money and thankfully it saved his life. I lost my dear Uncle Ron, a Purple Heart and Bronze Medal Recipient, just seven months earlier to appendicitis because he waited too long.

But my son was concerned about paying off such a high bill. By calling the hospital I discovered that they have a program where you can apply to have the hospital pay your whole bill, or at least part of it.

The income level to qualify was very low and if you were in prison or homeless, you were automatically accepted in and they paid your whole bill. I had a problem with that: you get your insurance for free and now, because you are in prison, you get your bill paid for free as well?! So I called and asked, “What about the person who paid for their insurance and works every day; who is not incarcerated… they get nothing?” Long story short, the customer service agent said, “You can always apply for the grant money; you never know what they will decide.”

So I told Christopher I would help him. I sent all the documentation along with my “ASK letter.” We finally got an answer; it took quite a few months.

They gave him a grant for over $6,500! I was so excited to tell him this great news; it was awesome!

I thought about how my brother Hal had initially not wanted to ask, but received what was needed. I considered the father deciding to give up, and then my son not wanting to ask, but having most of his bills covered.

Let me tell you, it’s ok to ask for help! Look at these few outcomes, they are amazing!!!

I said, “Christopher this is the whole premise of my book; it’s OK to ask for help. You will get one answer, yes or no. If you don’t ask you will never get a yes.” We asked and he got a yes, a huge yes. He was married soon after and this was such an amazing gift for him not to have that medical debt!

What can we help you find?
Connect with us on social media!
Popular Posts
Recent Posts
Categories
Archives

Sign up and receive NEW funding sources every month!

These funding sources are NEW and are not included in the Disability Funding Guide!

Sign up and receive NEW funding sources every month!

These funding sources are NEW and are not included in the Disability Funding Guide!

Sign up to stay in touch and receive the free eBook!

Sign up here to receive the free eBook version of The Funding Guide for Children with Disabilities. As an extension of the book, you will continue to receive great ideas, tips, and success stories in The Funding Newsletter and The Funding Blog delivered right to your inbox. You can unsubscribe any time.

Sign up to stay in touch and receive the free eBook!

Sign up here to receive the free eBook version of The Funding Guide for Children with Disabilities. As an extension of the book, you will continue to receive great ideas, tips, and success stories in The Funding Newsletter and The Funding Blog delivered right to your inbox. You can unsubscribe any time.